← The Return of Bumpkin
Bring on Mondays →

Chase the Rabbit gets easier

Recently I was able to sneak along on a lunch time trip to Red Hare Brewing in Marietta, GA. If you recall, Sarah and I visited Red Hare back on Cinco De Mayo with Amber and Ty. So this wasn’t a totally new endeavor for me. But skipping work to hit up breweries isn’t so bad. The view however has changed drastically since May, with new tanks going in constantly. This was the first time I’ve talked with Roger, co-partner to Bobby, their head-brewer. They are now 8 employees and estimate to see 14,000 visitors this year. They are nearing some added capacity that will bring them to 9,000 barrels a year in terms of productivity. They’ve also erected a new 25-ton silo just outside for mass grain delivery and storage. Their biggest installation for me is their canning line, capable of 32 cans per minute. Jessica, marketing and tasting room manager gave us a tour and showed off the new canning line. We were fortunate enough to see a brew day in progress, but I was really hoping for some canning to be in process. I’ve seen the awe of speed when cans are manufactured, but have yet to witness the beauty of canning. Which I feel kind of resembles a broken folding lawn chair.

The really exciting news is what 2013 looks like. Their flagship Long Day Lager is already available in cans. The Gangway IPA is now out in cans, though still scarce. Soon the Watership Brown Ale will be getting canned for the first time. Their artwork is great, so these all look great canned. Much better than what a bottle would portray. The plan is to package the lager in 12 packs also. They are also thinking of releasing the IPA and brown in bigger boxes down the road too. And are also hoping to get these cans out to golf courses around the area. In the past they’ve done four Rabbit Reserve beers, five if you include the rare Atlanta Craft Beer Week coffee cream stout. The original chocolate porter (which is great), an imperial red IPA, a good Saison, then an Oktoberfest. This year will only see two Rabbit Reserve beers. In February a new double black IPA and in October, the ACBW coffee cream stout. There’s also potential plans to offer these in 22 oz bottles. 2013 will see three seasonal beers, in March, August and October. Those may be past RR beers, but that wasn’t laid out, nor was packaging.

That’s not all the great news for next year, but I will just suggest to follow Red Hare on Twitter and like them on Bookface. Along with checking out their website, Red Hare Brewing, which unlike some other breweries, they keep updated.

Cheers to the entire Red Hare for a great midday hosting! 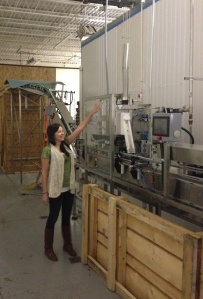 ← The Return of Bumpkin
Bring on Mondays →