You all have certainly noticed a lack of posts lately. We’ll blame it on the hustle and bustle of everyday life, some call it work. It’s not that lots of great things haven’t been happening, it’s there has been too much happening. I have notes from the first ever Athens Craft Beer Festival presented by Trappeze Pub and Hotel Indigo. So expect posts soon for both the VIP meet and greet plus Sunday beer fest. 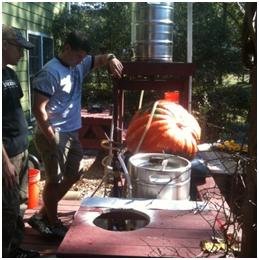 Homebrew season has finally started for me. I’m two batches in and don’t want to ruin what style they are now, but expect to hear about them soon. The homebrew season however, never seems to stop over at Gratis Brewing. Back on October 26 beer geek stardom reached a new realm. Was it the final frontier? I doubt it knowing Brian. But it’s going to take an X-wing fighter to surpass this. Many of us have brewed a pumpkin beer, adding either fresh pumpkin or canned pumpkin. We are always adding some spices, maybe as simple as pumpkin pie spice, or the full array of cinnamon, ginger, nutmeg, etc. I’ve even seen blogs, stories and forums on fermenting beer in a pumpkin. Some are success stories, other pure horror. But have you seen anyone brew in a pumpkin? 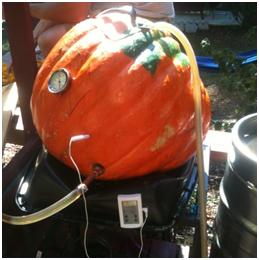 I arrived a little late and they had already mashed in. There was a little trouble getting the mash water to the correct temperature, but once it was there, it held it fine. Note to self; pumpkin isn’t a great conductor of heat, but can be a decent insulator. There was hardly any noticeable heat on the outside after the mash reached temp. I almost felt bad for the huge pumpkin, as it had more pipes and probes in it than an ER patient after a train wreck (sorry if that hits home to anyone). The circulation hose in went through the lid of the pumpkin, which even had a screwed on screen door handle. Hey, no one ever said a beer geek wasn’t detail oriented. The circulation hose out, you will notice on the bottom of the pumpkin, along with a temperature probe in the mash and a thermometer near the top. After the boil was going full roar Brian dissected the pumpkin and foolishly dug in bare hands to remove the awesome copper manifold he built for wort circulation. 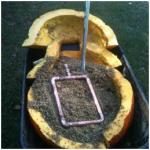 Not everything went according to plan. During the boil the fresh spices were being prepared; no McCormick stuff here. The funniest thing was the effort that went into grating, or grinding the cinnamon sticks. I grabbed a quick picture of a cinnamon stick tightened into a power drill before it went crashing true Death Star style. Finally a new Magic Bullet was revealed and it was new for all of 30 seconds. Now one of the cups has a nice cinnamon color stained glass look to it. What went surprisingly well was the toughness of the pumpkin. It might have leaked an ounce of wort during the mash and once broken down there was only a thin layer of pulp or rine that had turned soft. So the thinking is to brew multiple styles through the same pumpkin on the same day. Start with a true pumpkin (vegetable) beer then a stout and if I had my choice a berliner weiss with some cranberries thrown in to truly be festive.

We pulled a hot sample after the boil and gave it a couple of minutes to settle and the color, clarity and taste was amazing. That nice slick mouth feel from the pumpkin really shined. It also wasn’t a spice bomb like so many pumpkin beers tend to be. Thinking back to this year’s Pumking which was all ginger bread to me. Brian and Gratis Brewing has started working on beer labels and this is one of the funniest I’ve seen. In goes the energy and out comes a home run with the inaugural Gratis Brewing Bumpkin.

Update:  Brian has a great edited video of the brew day here http://on.fb.me/uzRg9E 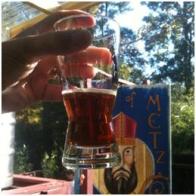 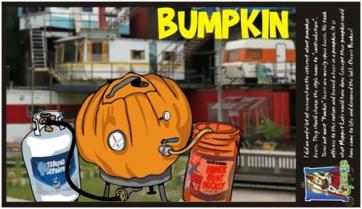